innocenteric May 7, 2012May 10, 20226 Comments
FacebookTwitterPinterestLinkedIn 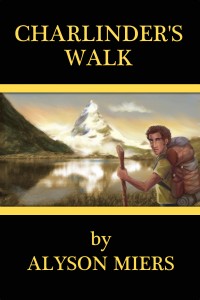 This entry is part 24 of 80 in the series Reviews

“We’re not ‘afraid of’ anything except giving you lot the idea that there is anything to talk about involving your God. Just who are you to decide what anyone should be talking about around here, anyway?” demanded Miriam.

“Maybe we do it out of concern for your souls,” Ruth offered, still just as composed as ever above her array of slender knitting needles and two-ply yarn. “Maybe we want you to start talking about what led to the Plague because we don’t want you to suffer eternal damnation in Hell for your actions.”

Charlinder wanted to run home and bury himself under a pile of Eileen Woodlawn’s writings, but one look at Phoebe’s face showed him what he felt: they just couldn’t look away.

Miriam began laughing again. “And who’s going to tell us what kind of behavior is going to send us to Hell? You?” she scoffed. “That is, assuming your promises of Heaven and Hell are places that really exist, which I’m far from convinced they are, but you know how I really feel about what caused the Plague, and what your God may have had to do with it?”

“No, Miriam, tell me how you really feel,” Ruth said flatly.

“I just don’t care one way or the other. I don’t see why anyone gives a lamb’s tail about what caused a disease that snuffed itself out almost a hundred-twenty years ago, when we have much more important things to do than argue over what might have happened. The Plague is in the past; it is history. We need to take care of the present, and if you have enough time on your hands to be quibbling about something that far in the past, then you’re not doing enough to get this farm moving into the future.”

“But what kind of future will we have if we just make the same mistakes that brought God’s anger on our ancestors? How many of us will survive another Plague?”

“And again I ask,” Miriam continued, “Who are you to know what any supposed God wants us to do, any more than the rest of us? And have you ever found it a little strange how your whole argument for why we should love God, and worship Him, and build our lives around bending to His will and honoring His divine plan, is that He supposedly brought about a disease that killed over six and a half billion people in less than two years? Have you ever considered how that looks to those of us who aren’t impressed with your reasoning for why God even exists in the first place? Any God who would do that to His creations for disobeying a moral code that He never even bothered to communicate to them is, as far as I care, not a God who deserves even our respect, much less our worship.”

This time, even Ruth was shocked. She finally blinked and recovered her voice enough to say, “There doesn’t have to be any mystery in what God expects from us. It’s a pity that none of our original survivors left a Bible in good enough condition to last this long, but all you have to do is pray, and listen to what He says.”

“Except I don’t think you, or any of the other Faithful, want us to pray,” Miriam told her. “You don’t want us to listen to voices only we can hear, and you don’t want us to discuss what we think may have happened over a hundred years ago. You want us to listen to you. And that’s why the rest of us don’t want to have this conversation. It doesn’t matter why our ancestors saw all their family and friends die of the Plague, because at this point, there’s nothing we can do to change the fact that it happened. Arguing about what they did to bring that disease on themselves isn’t going to make our children’s lives any easier or better. The only people who have any reason to care about why the Plague happened are long since dead.”

It is all too easy to ignore the arguments of someone you disagree with. Their argument falls on deaf ears as your counter-argument will be equally unheard. It is a rare thing to take the steps neccesary to prove your side or to disprove the other.

Charlinder’s Walk, by Alyson Miers, is the story of a future where mankind has been wiped out by a horrible plague that ravaged the world. One-hundred and twenty years later the descendents of the plague’s survivors live ina world where survival means more than anything else. Work and hardship are the trademarks of the day, but there is something more, lurking in the background, and when the young teacher of an American village decides to do something about it, he will travel the length of the world in search of the answers that will save his people from self destruction.

The book is a story of religion, science and the roots of society. Young Charlinder’s journey around the world makes him question everything he has ever known. When he is confronted with the true origins of the plague he must decide whether or not his own beliefs can be flexible enough to accept the truth and then what he should do with it.

The author takes the reader on an atypical journey through a genre that has become even more popular as of late. It would have been easy to make the story about the journey itself, the hardships of walking such a great distance, but sh chooses to make the story about the people and the societies that Charlinder meets on his quest to discover the great truth that has plagued his village since its founding.

I would definitely recommend the book. It is very well written and it will make any reader think about their own beliefs and how flexible they can truly be.

Wanna win a $50 gift card or an autographed copy of Charlinder’s Walk? Well, there are two ways to enter…

About the author: Alyson Miers was born into a family of compulsive readers and thought it would be fun to get on the other side of the words. She attended Salisbury University, where she majored in English Creative Writing for some reason, and minored in Gender Studies. In 2006, she did the only thing a 25-year-old with a B.A. in English can do to pay the rent: joined the Peace Corps. At her assignment of teaching English in Albania, she learned the joys of culture shock, language barriers and being the only foreigner on the street, and got Charlinder off the ground. She brought home a completed first draft in 2008 and, between doing a lot of other stuff such as writing two other books, she managed to ready it for publication in 2011. She regularly shoots her mouth off at her blog, The Monster’s Ink, when she isn’t writing fiction or holding down her day job. She lives in Maryland with her computer and a lot of yarn. Connect with Alyson on her website, blog, Facebook, Twitter or GoodReads.

Get Charlinder’s Walk on Amazon or Barnes & Noble.

book reviewcharlinder's walkGodMiriamPhilosophyplagueReligion and Spiritualityreviewalyson miersbiblebook
Previous Post
The Reason I will Get Out of Bed This Summer
Next Post
Eric, Where Have You Been?