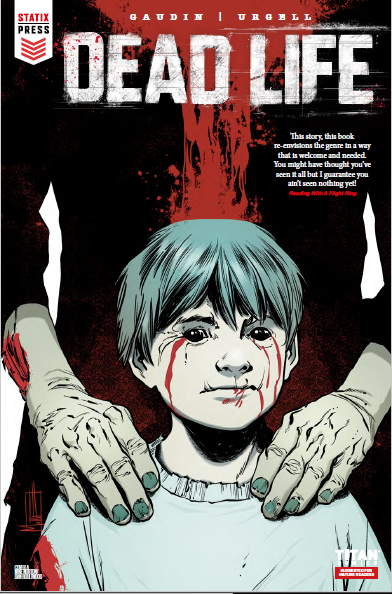 This entry is part 80 of 80 in the series Reviews

This review originally appeared at Geek-O-Rama.

Ground Zero. Stephen did not know that getting into his grandfather’s treasures in the attic so he could play Indiana Jones with the neighbor down the trail would lead to an outbreak. He was just having fun. How would he know?

Dead Life is an English reprint of the French comic, Dead Life: Crépuscule.

The story starts with scenes of life. Normal conversations and disagreements between husband and wife, the casual meal with extended family as Curtis and Kate return to his parents’ home to pick up their son, Stephen. When Curtis’s dad returns to the attic to retrieve some books he notices that one of his boxes has been opened and the contents are missing. From there the story takes off and kicks into a breakneck pace that never lets up. This is the beginning of a zombie story that does not hold back, and a captivating addition to the genre.

The art of Urgell is solid. It avoids the temptation to go straight for pure gore but pours on the blood and the stylized zombies in a way that conveys the horror, but lets the story drive the tragedy and terror. Gaudin’s storytelling shines as the reader is taken from the commonplace to the frenzied rush of survival and fear.

The story is for a mature audience due to violence, language and occasional nudity. This is a must have for any true connoisseur of the zombie or horror genres. This is rated a four and half out of five for me.

You can find more on this comic at Titan Comics.

DISCLAIMER: Geek-o-Rama received a copy of this book for the purpose of this review. All thoughts, comments, and opinions are those of the individual reviewer.