innocenteric Jun 18, 2015Apr 30, 20225 Comments
FacebookTwitterPinterestLinkedIn
This entry is part 70 of 80 in the series Reviews 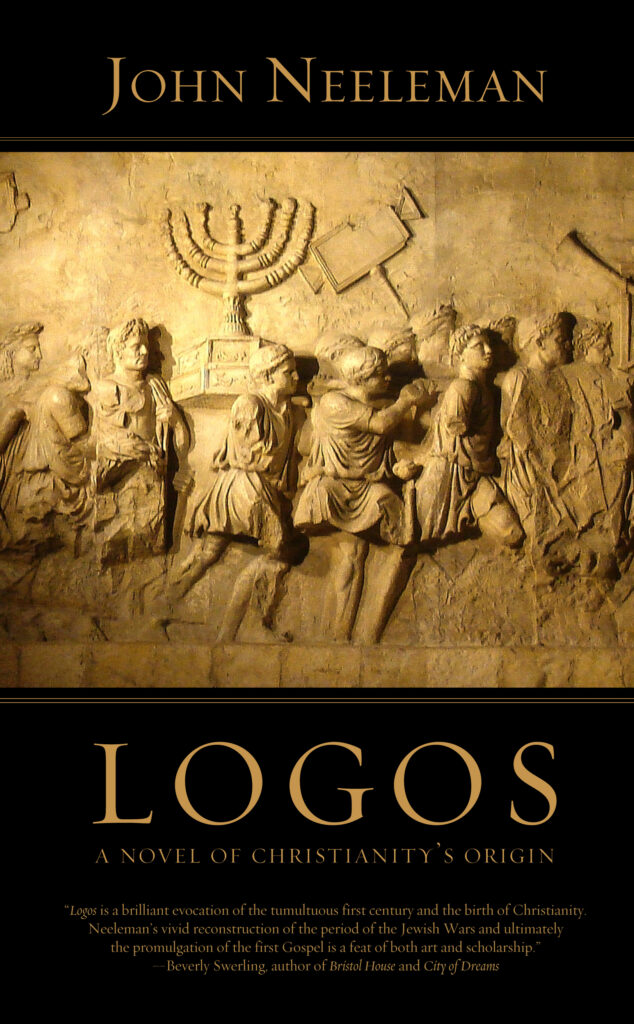 It is easy to forget that the stories written in the bible involved people outside of the main characters and their families. Real people living their lives in a time of great change were deeply effected by the coming of Jesus and the occupation of Palestine by the Romans. The priests, tradesmen, nobles and their families had to survive in a time of upheaval and chaos as the Jews tried to rise up from centuries of domination under the hands of the Persian and Romans. John Neeleman’s debut novel, Logos, is a story about the Jewish nobles of the time, the decisions they made, and the results.

This is a highly detailed read filled with so many specifics about the setting that it immerses the reader into the world of first century Palestine and Jerusalem. The buildings, the politics, the dress, all come alive while reading this book. The characters and the events leap off of the page and paint a picture that is easy to lose oneself in. I am not an expert on this period, but I know enough to be impressed.  While the setting is important, I want to make sure that you understand that the characters and story are not overshadowed by the details, but rather they are enhanced by it to the point of making them seem even more real in the reader’s mind’s eye.

If there is a problem in this book it is in the dialogue. When they speak, the characters lose their identities. If the attributions were removed it would be hard to identify which character was saying what. There are times when the pace comes to a crawl in order for the author to explain some point or describe some aspect of the setting. While the detail is appreciated, it can slam the brakes on the pacing.

Overall I enjoyed this book. I thought it offered an interesting glimpse into a period of time that is often glossed over in the history books and brings a sense of humanity to a period that had an impact on history that we still feel the repercussions of today. I would definitely recommend picking up this book, but with the caveat that due to some of the religious contexts within the book, there are people who will take offense. Relax and enjoy the story for what it is, a piece of fiction rooted in historical reality, and you will come out the other end the better for having read it.

About the Book – About the Author – Prizes!!!

About the prizes: Who doesn’t love prizes? You could win one of two $50 Amazon gift cards or an autographed copy of LOGOS! Here’s what you need to do…

That’s it! One random commenter during this tour will win the first gift card. Visit more blogs for more chances to win–the full list of participating bloggers can be found HERE. The other two prizes will be given out via Rafflecopter. You can find the contest entry form linked below or on the official LOGOS tour page via Novel Publicity. Good luck!

About the book: While novels and cinema have repeatedly sought after the historical Jesus, until now none have explored what may be a more tantalizing mystery—the Christian story’s anonymous creator. Logos is a literary bildungsroman about the man who will become the anonymous author of the original Gospel, set amid the kaleidoscopic mingling of ancient cultures. Logos is a gripping tale of adventure, a moving love story, and a novel of ideas. None of this should be regarded as out of place or incompatible in a novel about Christianity’s origin. Dissent, anarchism, and revolution—and incipient Christianity was no less these things than the Bolshevik, the French or the American revolutions—inevitably have involved ideas, adventure, and romance.

In A.D. 66, Jacob is an educated and privileged Greco-Roman Jew, a Temple priest in Jerusalem, and a leader of Israel’s rebellion against Rome. When Roman soldiers murder his parents and his beloved sister disappears in a pogrom led by the Roman procurator, personal tragedy impels Jacob to seek blood and vengeance. The rebellion he helps to foment leads to more tragedy, personal and ultimately cosmic: his wife and son perish in the Romans’ siege of Jerusalem, and the Roman army destroys Jerusalem and the Temple, and finally extinguishes Israel at Masada. Jacob is expelled from his homeland, and he wanders by land and sea, bereft of all, until he arrives in Rome. He is still rebellious, and in Rome he joins other dissidents, but now plotting ironic vengeance, not by arms, but by the power of an idea.

Paul of Tarsus, Josephus, the keepers of the Dead Sea Scrolls, and even Yeshua, the historical Jesus himself, play a role in Jacob’s tumultuous and mysterious fortunes. But it is the women who have loved him who help him to appreciate violence’s dire cycle.Get LOGOS through Amazon, or Barnes & Noble.

About the author: John Neeleman spends his days working as a trial lawyer in tall buildings in downtown Seattle. He lives in Seattle with his wife and children. He also represents death row inmates pro bono in Louisiana and Texas. As a novelist, his editorial model is historical fiction in a largely realistic mode, though there are hallucinatory passages that reflect Neeleman’s concern with philosophical and spiritual matters, in part a residue of his religious upbringing. He was raised as a seventh generation Mormon, and rebelled, but never outgrew his interest in metaphysical concerns.
Connect with John on his publisher’s website, Facebook, Twitter,or GoodReads..